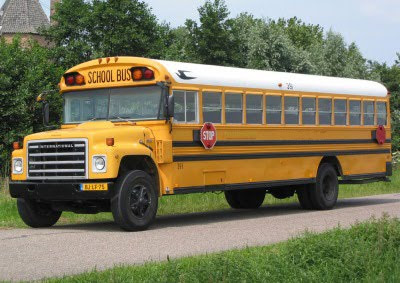 We lived in Wallsburg and went to school in Heber, a twenty-five minute bus ride that wound around Deer Creek Reservoir. It seemed longer than twenty-five minutes. Most of the time, I propped my knees on the seat in front of me, and in classic shy-little girl style, lost myself in whatever book I was reading at the time.

Donald was our bus driver. He'd taken over the job when his Dad retired. I don't remember much about him except for the line that has become a classic in our family, "Quieten down now." This was usually said while he looked at the children in the wide rear-view mirror. I always hoped everyone would behave because when everyone was wound up, Donald looked so long and hard in that mirror that I was sure we'd go off the road, sink in the reservoir and die a tragic, drowning death.

After school, the bus students would line up on the north side of the school to catch the buses. Looking back, I'm not sure why the buses weren't there waiting for us, but they weren't. We usually waited on them, and waiting in that line was sometimes rough. I usually stood with my brothers. One day, Brady, a boy I liked and feared in equal parts was in a teasing mood and decided his target would be one of my little brothers, who stood in the line in a pair of pants that he was outgrowing. They were a little short. "Hey, Floods," Brady said to my brother. He said it a couple of different ways and I began to get angry.

"At least he grows, you shrimp." Believe me when I say that this second insult was said with fear and trembling. And a much softer voice. But that didn't matter. The next thing I knew, my head was reeling and my nose felt the size of an orange. I reached up to touch it and when I moved my hand away, it was covered with blood. I'd never had a bloody nose before and I've never had a flowing bloody nose since. But my nose was like a faucet. Blood gushed through my fingers.

By this time, the bus had pulled up and Donald, seeing there was trouble stepped out. I don't know if he ever knew exactly what had happened, but he grabbed the blood rag from the floor under the glove compartment and pushed it up against my nose, took one of my hands and placed it over the rag to hold it in place. And I wanted to die. He might as well have stuck my head in a pig trough.

That rag had been there for years, maybe decades, and I'd seen it used several times. I don't think it had ever been washed. Every bloody nose on that bus for the past thirty years had bled into that rag. It was filthy. It was stiff. It smelled awful. I tried to move it away from my nose only to have Donald push it back firmly. "Keep it there. I don't want you bleeding all over the bus," he said.

I hadn't cried. Sure, my nose hurt. My eyes were stinging, but it wasn't until I knew that I was going to have to hold that foul thing next to my face for the next twenty-five minutes that the tears came. And they came all the way home. When we arrived at my stop, I dropped that large, grimy square of nastiness off in its special spot, where it stayed until the next bloody nose.

Brady's mom made him come and apologize to me. I felt oddly brave and tough, something very new for me. It was a heady feeling to know I'd provoked him so completely. But to this day, I get a little sick thinking about that awful blood rag. I deserved better than that.
Blast from the Past

Rich said…
Karey - This is a great story.

I’ve said it before, but that era was so different from now, from the bullying to the bus driver’s first aid methods. If anything like what Brady did then happened now, the perpetrator would be suspended from school, and rightly so. I admire your courage in standing up to Brady. I was a little scared of him, and I was twice his size.
January 22, 2011

Unknown said…
eeewwwww! I don't remember bullying on the elementary bus the 2 years I went (that was the Jr high bus for one year). But I do remember my lunch box falling open as I hopped over my friend's cousin's breakfast that she lost in the aisle just before we pulled up to school. It was an egg salad sandwich that I lost that day. I cried.
January 22, 2011

Leslie said…
bus stories are the best. i was one of the cute little sisters of my big studly brothers, so i was treated well those years that i rode the bus. all the girls who had crushes on my brothers would talk to me and be nice to me and give me stuff.

but we did have a couple of interesting bus drivers. cecil was an old man. he was awesome. we all sure did love him.

then daryl took his place and he was a little scary. he didn't seem like a safe driver like cecil was. he was also a lot more abrasive to us kids, so we missed cecil.

anyway, i will stop there. that is just a tidbit about my bus memories.

OH!!! and anyone who ever rode a school bus should relate to what you said about putting your knees up on the seat in front of you. we would do that and catch a nap on our way to and from school. :)

by the way, the blood rag sounds just plain awful... and way to go standing up for your brother.
January 23, 2011

Jessie said…
Ohhhh, the bus ride to Heber (and Midway). I think while you were dodging Brady, I was dodging Rory. Bitter-sweet memories. I think I have a journal full of my own memories of those bus rides. Love your stories, though. You're such a "gifted" writer.
January 23, 2011

kacy faulconer said…
Blood rag--ew. I got your book Friday and just finished it. Thank you! You are a great writer and I'll review your book on my January book list.
January 23, 2011

Great story. That is awesome that you stood up for your brother.

I am cringing over the blood rag. Nasty!

Anonymous said…
How do kids ever grow up normal with so many weird experiences in their lives? Yucky experience, but your way with words makes it so real that I can almost feel and smell the "blood rag" in my face right now! (-;
January 25, 2011

Becky Darling said…
Your hilarious!! If I haven't told you yet, you always make my day with your crazy stories!! Your amazing!!
January 26, 2011

Alison said…
Oh Karey...that blood rag makes me ill. Im gaging at one minute and giggling the next...what an experience!

I only remember on of my bus drivers...Fred Keetch. He was such a sweet bus driver...he would drop me off right at my doorstep or take me to my dads store on Pleasant Grove main street.

Kristi said…
you were brave,he was a punk, and the blood rag, absolutely foul!
February 03, 2011 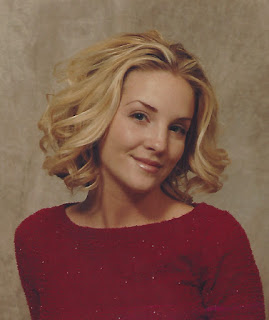 I've cried a lot the last nine days. First, I learned that the sweet girl that was my niece by marriage for a few years had passed away. Her mom, my once sister-in-law and still friend, had lost her oldest daughter. She was only thirty-six but had been suffering from the results of a terrible injury for more than a decade. My sweet nephews had lost their half-sister and the world had lost a lovely young woman who we will miss.  Today was her funeral and my heart ached for her family, her fiance, and all of us who will miss her. Four years ago, Savannah took her guitar to the Charleston, an assisted living facility not far from our home. She asked for the names of a few residents who might enjoy a couple of songs and a visit. That day she met William "Bud" Shelton, and a sweet friendship was formed. She visited him dozens of times over the last four years and some of those I was able to tag along. He requested songs (she learned a Johnny Cash song for him), they ta 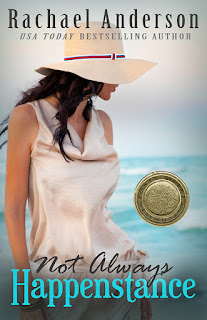